4. The Pleasure of Fresh Herbs

A Chef for All Seasons

Oliver Beckert has the job many of us dream about.  Executive Chef, Four Seasons Resort Manele Bay on Lana'i. Lana'i is a private island in Hawai'i.

The resort is perched atop jagged cliffs overlooking the Pacific Ocean. Each of the three restaurant dining rooms and the two cocktail lounges share this dramatic view. The two extraordinary golf courses (each with a high caliber clubhouse) actually incorporate the view into game. The courses also connect the resort at Manele Bay to the Lodge at Koele where the chef oversees two more restaurants.

At 33, Chef Beckert has established a remarkable career.  Born in Nuremberg, Germany, he began the traditional European apprenticeship with Gasthof Bammes, considered one of the finer country restaurants in Germany. This led to smaller restaurants around Germany and then to the five-star Hotel Bellevue Palace in Bern, Switzerland.  Beckert has worked in New York, Washington, DC, London, and Miami, Florida with the Four Seasons.

Originally beckoned to Maui from his post in Miami to assist in the Manele Bay renovation (the resort recently underwent a fifty-million dollar enhancement), Chef Beckert was offered the position of Executive Chef.  He accepted and along with his wife Yvonne and young son, Rafe, moved onto this small Hawai'ian island.

I had the opportunity to meet Chef Beckert recently. After a delightful poolside lunch at the sun-drenched Ocean Grill he showed me around the kitchens. The cavernous main kitchen differed, naturally, from the cozy quarters of the Ocean Grill and the specifically designed spaces for the Italian themed Ihilani but they all shared similar traits of gleaming organization.

The sous chefs are an international lot hailing from the Philippines, France, Mexico, Germany, and Guatemala as well as points around the United States. "They run the restaurants," Chef says. "It is an excellent training ground. I let them experiment as much as possible, without interfering, to gain experience and confidence."

Like most dream jobs, Chef Beckert's is not without challenges. Major food shipments arrive via barge only once a week. A central supply house located in Lana'i City midway between the two resorts serves both with twice-daily requisitions, as does a dedicated bakery.  "All this was a big adjustment from my mainland positions," Chef tells me as he describes changes that he put into place to make sure food products were handled as efficiently as possible from boat to central supply.

Fresh fish is flown in three times a week from Honolulu. The other islands provide specialty supplies. Maui onions, of course, are on every menu.  Kona spiney lobsters, apple bananas and Molokai sweet potatoes are other examples. As are the mushrooms from a Big Island farm called Hamakua. "One of the best I have seen," Chef writes in an e-mail.

Local growers provide the resorts with organic herbs and vegetables. "I was able to get the local farmers here in Lana'i involved to grow for us," he says. "Tatsoi, mizuna, basil, baby arugula, Hawai'ian chile, mint, ti leaves and parsley. The quality is just amazing and it is a big difference if you cut the herbs and serve them a few hours later than to have them sitting in the fridge for a couple of days."

"They will grow just about anything we want," Chef says, "except for tomatoes. They say tomatoes don't do well in this soil." He finds this a little hard to swallow. "Yvonne is going to test it out in the backyard garden she is planting."  She is also starting to grow five types of basil, sage, rosemary, mint, thyme, parsley, cilantro, cucumbers and eggplant.

"I love cooking with fresh herbs and spices," he tells me. "They add so much to a dish. A lot of our dishes get their distinctive flavor with fresh herbs. Our rack of lamb has a mint-parsley and pistachio crust. We serve the smoked marlin and crab Savoy with the mizuna, the Salad Caprese with two types of basil, osso buco with parsley, garlic and lemon, beef carpaccio with baby arugula and white truffle..."

Local ingredients are a logical choice to use when you cook on an island. When asked about the Meyer lemons mentioned on one of his menus, Chef responded: "The lemons are from Lana'i indeed, and it is a small Meyer lemon type…we marinate the rinds in olive oil for 30 days to have our very own Meyer Lemon Oil and the juice we use for a very nice 'Gelato' Ice Cream in Ihilani."

The distinctive Hawai'ian Alaea Red Sea Salt is served along with Furikakae (a prepared mix of sesame seeds and seaweed) and sweet butter on a small tray alongside freshly baked sourdough rolls at Hulopo'e Court. "It was a big hit with tasters," he says.

I asked Chef Beckert if there was as much clamor about local foods from the resort guests as we often hear on the mainland.  "Local food is what is served at a luau. We have a popular luau grounds for special events and we offer kurobota (a dark meat pig) in the Kalua Pork and Cheese Quesadilla. My goal is to keep a wide variety for the guest's stay. We don't want them to get bored as they eat throughout the week at our different restaurants."

Boredom is unlikely as far as I can tell. My stay lasted a mere two days and unfortunately coincided with the days that Ihilani is closed. From studying the menus, I could easily eat for a month at all these different venues and be quite happy. Alas, here at home I must content myself with the following recipes that Chef Beckert was kind enough to share with us.

I sampled this dish while visiting the resort and fell in love with the tender, firm seafood seasoned to perfection in a zesty marinade. "U-10" means it will take only 10 (or fewer) shrimp to make up a pound so look for the largest ones you can find.

Peel, devein and dice the shrimp and scallops, season with salt and pepper, add the lime juice and marinate for one hour.

Blend the orange juice and chile; add to seafood and marinate for one more hour.

Method: In a bowl, toss all ingredients except cabbage and ogo. Season with Kosher salt and fresh ground white pepper.

Transfer cabbage to a martini glasses, top each with Poke and garnish with coarsely chopped ogo.

Find out about ogo seaweed.

Visit the Lodge at Koele.

Grow your own mizuna and tatsoi with Seeds of Change. 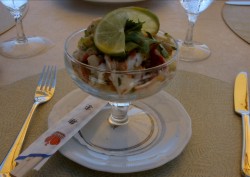 There's more to salt than just the shaker, it is a life force. Follow along as it shapes the world.

On Food and Cooking: The Science and Lore of the Kitchen

Any professional chef will tell you, this may be the most valuable tool in your kitchen.

A collection of over 100 recipes for making your own spice combinations gathered from spice shops and herb farms all over America.

Not a cookbook but an illustrated guide to ninety fresh and dried chile peppers from a man who knows how to use them.