2. Take Time to Stop and Eat the Flowers 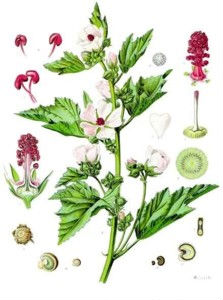 It all started with a breezy little article that a friend of mine gave me about making marshmallows. I know what you're thinking, how trendy, those gelatinous gems are all the rage in gourmet kitchens these days. This article by Associated Press writer Lee Reich was entitled "Candy from the Garden?"

The original marshmallow, I thought, was the candied root of the marsh mallow plant. No gelatin, no stabilizers, nothing unpronounceable. Those are the ones I wanted to make and I had access to just that plant.

Althaea officinalis is a beautiful member of the Malvaceae family. We have a lovely specimen at the Master Gardener Herbs in History Garden that I help tend during the summer. The typical marsh mallow will grow to about four feet high, but our spectacular plant reached eight this year, I'm pretty sure.

Must be a whole lot of roots down there, I thought to myself. I was not wrong. Hopefully I didn't kill the plant, but I dug up that whole root ball, leaving a few root remnants for next year. Returning home with my prize, I read the Candy from the Garden article again and realized I should have dug the soil out just a bit then taken a few of the roots. Ah, impulsive me. (I did take the remaining root ball back to the garden and planted it again. We'll see.)

There were many, many fat, white roots as the article suggested I would find. I chopped them off and brought them into the kitchen. I washed them well, peeled them like a carrot, although with much more of a struggle, and sliced them into even lengths. Although the roots were large, mini-marshmallows is more the visual you need right now.

Once the marsh mallow roots were peeled, it was amazing how slimy they became. It was actually just disgusting. I wanted to try one of them raw but could not bring myself to put even a small, slippery bit in my mouth.

That's got to be why the next step is to boil them for about 45 minutes. This removed that ick-factor while softening them at the same time.

Turns out, the ick-factor is actually what made the original marshmallows. The roots were boiled and then strained away. The mucilaginous liquid was mixed with a gum, egg whites and sugar. The Food History Timeline website tells us that it was first developed in the mid-19th century as a "pectoral remedy." The sugar was included to make the medicinal concoction palatable.

So anyway, I was making candied marsh mallow root, not the original marshmallow. I had made candied angelica root before so I knew how to do that part. It starts with a simple syrup. The boiled roots are completely immersed in it so that they were coated with the sticky, sweet syrup and then you lift them out and let them dry.

I took the treats to our annual Master Gardener awards dinner with the little sign explaining they were the original marshmallow (which I firmly believed at the time). People loved them. I was surprised because this is the same group that teased me without mercy about the candied angelica stems just because they happened to taste a lot like grass mixed with sugar.

The candied marsh mallow roots did taste quite a bit like real marshmallows, but I think the reason is that the main flavor in both is sugar. However, as one of the tasters said, "I don't think they would work in hot cocoa."

Peel the skin from the roots with a carrot peeler. Slice the roots into half-inch pieces.

Bring a large pot of water to a boil. Add the root pieces and boil for about 45 minutes or until they are very soft. Drain, discarding the liquid.

In a pot large enough to hold the cooked roots with plenty of room, combine the sugar and the water, stirring until the sugar is dissolved; bring to a boil. After a minute or two of boiling, add the cooked mallow roots. Stir well to coat and boil a couple of minutes more.

Using a fork, carefully lift the candied roots from the syrup, allowing it to drain off as much as possible. Transfer the pieces to a sheet of parchment or waxed paper to cool.

These will keep for about a week in an airtight container.

Growing and Using Stevia: The Sweet Leaf from Garden to Table with 35 Recipes

The Sweet Herb is hot! This tiny tome shows you how to grow the pretty little plant called stevia and then what to do with it once you have a harvest.