Herb of the Year 2005: Oregano, Family and Friends 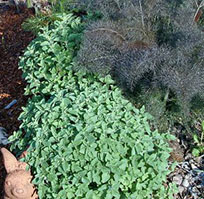 Each year since 1995 the International Herb Association and the Herb Society of America have announced their choice for the Herb of the Year.  They have selected oregano for 2005. And marjoram. And Dittany of Crete, as well as Mexican oregano and Cuban oregano, all cousins of Origanum vulgare.

If you have read "All About Oregano" and "All About Marjoram" you know that the two herbs have a confusing history where botanists are concerned.  Oregano has long been referred to as 'wild marjoram' but the two herbs are distinctively different in the kitchen. From here we will concentrate on all the different oreganos but watch for a revised and expanded article about marjoram coming soon.

Oregano is frequently associated with Italian and Mediterranean cooking. It is a strong herb that enhances a wide variety of foods that include meats, vegetables and bean dishes. Unlike many herbs, oregano takes well to long cooking times allowing us to use it in stews, substantial sauces or pot roasts.

The most familiar variety in the kitchen is referred to as Greek or Mediterranean oregano, Origanum vulgare.  Mexican oregano, Lippia graveolens, has a more wild taste that is suited to recipes with a Latino bent.  Cuban oregano, Plectranthus amboinicus, is unusual to cooks outside the Caribbean.  A member of the coleus family, Cuban oregano has fleshy leaves and a taste that is more similar to sage than to the other oreganos.

Ornamental oreganos add beauty to the garden. Some have a mounding habit while others offer variegated leaves or spectacular flowers.  Dittany of Crete, although it is edible, is favored more by gardeners for its soft, round gray leaves.

Oregano is one of the rare herbs that chefs often prefer dried rather than fresh. It is said that the flavor becomes less bitter or more even after drying. Fresh oregano is intense, the small furry leaves have a big bite. The reason that the dried version may be less extreme could be a result of commercial packers combining many different types of oregano including the less flavorful garden variety.

Even if you don't grow it in the garden, you will still find it easy to enjoy fresh oregano. Most well-stocked supermarkets now sell fresh herbs in the produce department or you might look for fresh bunches at your local farmers' market.  Fresh oregano will hold well in the refrigerator when you wrap it loosely with plastic wrap before storing in the produce drawer.

Dried oregano is readily available at the supermarket. Don't be tempted to buy one of the oversized containers that you will find at a discount unless you are certain you will use it up in the next six months or so. As is the case with all dried herbs, oregano will be much more flavorful and enjoyable if you replace it on a regular basis.

Dried Mexican oregano is found alongside the other ethnic ingredients at the grocery store. Look for it packaged in cellophane envelopes, perhaps labeled simply as oregano, among the other spices from Mexico. Mail order spice companies and health food stores usually stock both Greek and Mexican oreganos as well.

The best way to start growing oregano that you want to cook with is to buy plants in the spring. Look for the variety Origanum hirtum to find Greek oregano, the one that is most common to the spice shelf. Inhale the fragrance and taste a leaf before you buy to be sure that you are getting what you want.

A frequent problem in starting with seeds is that you may end up with a common variety that is not particularly flavorful and has a tendency to spread throughout the garden quickly.

Oregano grows the best in more dry and mild climates. As a perennial, the plant is cold hardy but won't stand a deep freeze. Oregano likes full sun and a light touch with the fertilizer--usually one application in the spring is adequate. A well-drained soil and caution with watering will prevent oregano's worst enemy: root rot. Spider mites, aphids and leaf miners are occasional problems that may also occur.

As with most herbs, regular snipping encourages growth and bushiness. In his book The Herbfarm Cookbook, Jerry Traunfeld suggests cutting oregano plants back hard, by two-thirds, after flowering. The handy tables at the back of the book indicate that three plants will suffice for the average kitchen.

Papa Geno's has eighteen varieties of oregano plants, culinary and ornamental. Although we haven't ordered oregano, we have been pleased with other plants from them. Good information for caring for your transplants is provided at the website.

Mountain Valley Growers are certified USDA organic and have an amazing array of oreganos available. We haven't ordered from this company, either, but their website is impressive and they responded to our request to use the photo above very quickly. This site has the best herb plant photographs of any we have discovered on the Internet.

Johnny's Seeds is a reputable company specializing in organics. They have a single oregano they refer to as "a special strain of true Greek oregano." We like their catalog more than the website for growing information.

Seeds of Change takes us back to humble beginnings as they seek out heirloom varieties of plants. They offer Origanum hirtum seeds along with plenty of good information about organic gardening at their website.

Park Seed, more mainstream than those above, has a large devoted following of expert gardeners. They have seed for both Origanum vulgare and the hirtum variety available.  This is another website just full of helpful advice.

For seeds, if you must, we have always been happy with these companies...

4. A Pinch of Saffron: Herbal Tapas

5. A Book Review: The Bountiful Container

Rosalind Creasy knows all about using food plants to round out your yard. She pioneered the idea 25 years ago. This updated edition includes 300 inspiring photographs.

A luscious book from the Herbfarm kitchen-nursery filled with unusual ideas for using fresh herbs. See aPinchOf.com's review of this book.

With all the different types and flavors of oregano, we can take advantage of it in the garden and the kitchen.  Grow the common garden variety oregano, origanum vulgare for its colorful flowers. Try Cuban oregano for both its lovely foliage and for a new taste in your cooking.

To release the most flavor, rub the dried leaves between your fingertips before adding to recipes. Experiment in your cooking with the many different types of oregano to learn about the intricacies of the flavors.

Below are three recipes that are enhanced by Greek oregano.  Here in the test kitchen, we realized that we actually preferred dried oregano in the soup.  Fresh is preferable in the White Bean Puree because it adds much needed color to the pale yet flavorful dip.

Adding the dried oregano in two different increments during the cooking time of the fennel provides an interesting flavor kick. We used the dried version but, as we have learned, fresh would be equally good. Simply follow the rule of converting fresh to dried herbs--one teaspoon dried is the equivalent to one tablespoon fresh.

Place the soaked beans in a 2-quart saucepan with plenty of water over high heat and bring to a boil; skim any foam that floats to the top.  Reduce the heat to maintain a hard simmer and cook for 30 minutes.  Add the garlic, 1 teaspoon of the salt, 1/8 teaspoon of the pepper and the bay leaf.  Simmer for another 30 minutes; add the remaining 1/2 teaspoon salt and 1/8 teaspoon pepper.  Continue cooking until the beans are very soft. Actual cooking time will vary with the freshness and size of your beans.  Check frequently and add water as necessary to keep the beans submerged.

Drain the beans but reserve the cooking liquid. Remove the bay leaf and discard.  Puree beans using a food processor, hand-held mixer or potato masher, adding small amounts of the cooking liquid to achieve the texture of refried beans.  Stir in the olive oil and oregano.  Taste to check seasonings.  Serve warm or at room temperature with bread, pita chips, crackers or fresh veggies.  Makes about 1 1/2 cups.

A QUICKER VERSION:  Use canned beans and roasted garlic.

Soup of Pasta and Garbanzos

As you begin the soup, bring a large pot of salted water to a boil for cooking the pasta.  Place half the can of garbanzo beans into a small bowl and mash with a fork.

Heat the olive oil over medium-high heat in a 2-quart saucepan.  Add the onion; cook and stir for 2 minutes.  Stir in the garlic, cooking and stirring 1 minute more.  Add the tomatoes and oregano; reduce heat and cook 3-5 minutes, or until most of the liquid has evaporated.  Stir in the beef broth and mashed garbanzo beans.  Maintain the soup at a simmer until the pasta is finished.

Meanwhile, after the pasta water has come to a boil, add the pasta and cook according to package directions.

Just before draining the pasta, stir the remaining whole garbanzo beans into the soup along with the crushed red pepper, if using. Taste; season with salt and pepper, as needed. Stir in the drained cooked pasta.

Salt and pepper, to taste

To prepare the fennel, cut off the fronds and stalks just at the bulb. Mince about 2 teaspoons of the dill-like foliage for a garnish; set aside. Store remaining fronds and stalks for another use. Remove the tough outer layer of the fennel bulb and begin slicing thin strips, starting at the top and working your way down to the root end, stopping when you start cutting into the tough root.

Heat the oil and butter in a medium skillet over medium-high heat. Add the sliced fennel along with the onion and garlic. Saute 3-5 minutes until softened and beginning to brown. Stir often to prevent overbrowning. Sprinkle with 1/4 teaspoon of the oregano and pour in the chicken stock; cover and reduce heat to low. Simmer for about 10 minutes, stirring occasionally.  Remove the cover, season with the remaining oregano and the salt and pepper. Increase the heat slightly and continue cooking until the liquid has evaporated. Taste; adjust seasonings if necessary.  Sprinkle with minced fennel foliage and serve right away.

McVicar's loyal following as well as the critics love this beautiful book. Although written for gardeners, culinary enthusiasts will also find it helpful.