1. A Pinch of Saffron: Herbal Tapas

3. Tahini in Your Kitchen 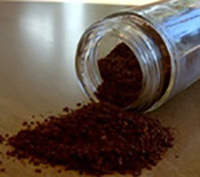 Spices of Life: Simple and Delicious Recipes for Great Health

Healthy cooking at its finest, and tastiest.

If you are like most people, when you hear the word "sumac" the first thing that comes to mind is poison. It is a good idea to be wary of poison sumac, also known as poison oak, but you have nothing to fear from sumac the spice.

Although the two are related, sumac the spice is derived from the berry of a plant called Rhus coriaria. The name refers to the word corium, Latin for leather, as the leaves and bark are used in the tanning process. This shrubby tree grows wild in the Middle East and parts of Italy. The brick-red fruits are sold as dried coarsely ground or whole berries. The spice is also known as "Sicilian sumac," "sumaq" or "sumach," and other similar variations.

Rather tart and astringent in taste, sumac is often referred to as a "souring agent." It was once used to calm the stomach. Today sumac is considered mainly a condiment used much like salt in that it is passed in small dishes at the table.

The spice is tasty on grilled meats and fish or as a seasoning for rice. It complements lentils and other beans as well as vegetables. "Try seasoning a thinly sliced onion with 2 tsp. of sumac," suggests the latest Penzey's Spices catalog.

Sumac is best known as a major ingredient in "za'atar." This is a spice blend that also includes sesame seeds, thyme and salt. Za'atar is sprinkled on vegetables and freshly baked flatbread. It is mixed into olive oil or yogurt for a zippy dip. Spellings for this mixture are as varied as that of sumac. It may be known as "zahtar," "zather" or "zatar."

Look for sumac or prepared za'atar at Middle Eastern markets,

In a small container with a lid, shake together the thyme, sumac, sesame seeds and salt. This is a Middle Eastern spice blend called "zaatar."

Cut each of the cherry tomatoes in half placing them into a medium bowl as you go. Sprinkle with one tablespoon of the zaatar; toss well. Taste and add more of the seasoning, in small increments, until you have what you consider a tasty concoction. Serve right away along with the flatbread allowing diners to pile the tomatoes onto the bread for themselves.

Makes enough for 4 to 6, depending on serving size.