2. Marinades: A Way to Create Your Own Signature Dishes 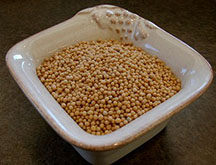 Should you wander the Mission Trail in California, keep an eye out for mustard plants. The story goes that Spanish padres scattered mustard seed to mark the trails as they traveled from mission to mission. They knew the plant reproduces so quickly that it would help them find their way.

Mustard seeds are a well-traveled spice. Ancient Rome enjoyed it as a condiment and a medicine. The New Testament of the Bible, Matthew 13:31, compares a grain of mustard to the kingdom of heaven. Crops were raised in 800 A.D. Paris to generate revenue. Vasco da Gama carried mustard on his first voyage around the Cape of Good Hope in 1497. Today it is often called the Spice of Nations because it is so universally used.

The three varieties of mustard are all members of the cress family. Brassica hirta, white or yellow seeds, and Brassica nigra, black mustard are both indigenous to southern Europe and the Mediterranean while Brassica juncea or brown mustard is indigenous to the northern Himalayas. Mustard grows easily in temperate climates and is cultivated all over the world today.

Pungent and flavorful, mustard has remained an important condiment throughout the ages. It is available in whole seeds, as a powder, or "flour," and, most popular, as a prepared paste. The sharp flavor compliments meat, eggs, pickled products and fish, just to name a few.

Mustard flour is reported to have been "invented" in 1720 when a Mrs. Clements of Durham, England tried hulling, grinding and sifting the seeds in a mill. She earned a good income by selling "Durham mustard." Later, mustard became one of the first products to be mass-marketed. The Mustard Club was formed in 1926 to tout the spice's healing qualities through consuming and bathing.

Coleman's Mustard, still well known, introduced contract farming in 1878. Much of Canada's vast prairie lands are under similar contracts today to grow mustard seed for large companies. Although now highly mechanized, the fundamentals of mustard processing remain the same now as they were in the late 1800's.

Ground mustard has no aroma or even much flavor until liquid is added. To mix your own hot mustard, just add water and allow it to sit for about ten minutes. After an hour or so, the pungency begins to decline unless some sort of acid, like vinegar, is added. Don't be surprised if the mustard you mix at home is not as brilliantly colored as that in a jar. Commercially prepared mustard is yellow from the addition of turmeric. Mustard should be added near the end of the cooking or it will vanish.

Mustard is said to symbolize indifference. That's certainly not the case at the Mount Horeb Mustard Museum. This Wisconsin institution displays more than 1500 bottles from all over the world. To visit the museum's website click here.

Salt and pepper, to taste

Heat oil in a medium skillet over medium-high heat. Add pork chops and season with 1/4 teaspoon of the thyme and salt and pepper. Brown well on one side before turning over to begin browning the other side. After turning, scatter the onion in the skillet around the pork, stirring a bit to coat with oil. When pork chops are thoroughly browned, reduce heat to medium-low.

Add the orange juice, water and remaining 1/2 teaspoon of thyme to the skillet. Bring to a simmer and cover. Continue cooking at a slow simmer for 15 minutes. Uncover and continue simmering until most, but not all, of the liquid has evaporated, about five more minutes. Meanwhile, combine the sour cream and mustard in a small bowl.

Transfer the pork chops to a warmed plate. Remove the skillet from the heat and gently stir in the sour cream/mustard mixture. Reduce heat to very low and return skillet to stove. Return pork chops to skillet, cover and heat the sauce but be sure it does not boil.

To serve, place pork chops on a serving platter and pour the sauce over top.