2. A Book Review: The Mistress of Spices 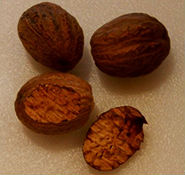 Nutmeg is said to be one of nature’s great packaging jobs. It is the seed of a fruit on tall tropical trees, called Myristica fragrans, in Indonesia. When ripe, the apricot-shaped fruit splits open to reveal the seed surrounded by its aril, a thin, bright red covering that is scraped off to become mace (another spice, sometimes used in place of nutmeg). The seed is the nutmeg.

Nutmeg trees are indigenous to the Moluccas Island group in Indonesia.  These trees were the source of ruthless conflicts for monopolization by early European spice traders. Beginning in 1512, when the Portuguese learned that nutmegs grew on only a few islands, the desire to control the trade took over.  They managed to operate a monopoly until the Dutch drove them out in 1602. In an effort to drive the prices even higher, the Dutch attempted to limit the trees to the islands of Banda and Amboina.  Nature and smugglers made this futile as fruit pigeons "deposited" the seeds on nearby islands. The French took smuggled plants to the island of Mauritius.

Once the cultivation of nutmeg trees began, experimental plantations were developed around Malaysia and the Caribbean.  The most successful of these operations began in 1843 on Grenada.

The island suffered a serious set-back when a 1955 hurricane blew down 90% of the trees. Today, the largest producers of nutmeg are still Grenada and Indonesia.

Propagated from seed, the trees will begin producing fruit in their sixth or seventh year and may continue for as many as ninety.  The harvest is collected after the fruit has fallen to the ground or with a gai gai, a long pole that is fitted with prongs and a basket. After husking, the mace is separated from the shell of the nutmeg. The nutmegs are then dried in their shell for a month or two before being cracked open and graded for trade. Approximately 80 nutmegs make up a pound.

With its warm, spicy flavor, nutmeg is best when freshly grated. Small graters designed just for this purpose are available, often with a storage compartment for the whole nutmegs.   The ground spice will quickly lose potency and flavor so this method is far superior to the jars found at the supermarket.

Nutmeg is typically associated with baked goods and sweets but it is also a nice compliment to meats, cheeses and fruits. Nutmeg is excellent with spinach and winter squashes or sprinkled over dairy products like eggnog or cappuccino foam.  You can find whole nutmegs at most natural food stores where herbs and spices are sold.

An interesting note, consuming large quantities, like more than one whole nutmeg, can be poisonous.

French Toast with Bananas and Pecans

Preheat a griddle over medium heat.

When griddle is hot enough to make a drop of water sizzle, dip 4 slices of bread briefly, but fully immersing, into the egg and milk mixture and place onto the griddle. Allow to brown on one side, then flip and brown the other sides. This is best done slowly to avoid soggy middles. Keep warm in a slow oven. Repeat two more times until there are 12 slices of French toast.

To serve, cut each piece of toast in half diagonally, arrange six halves each on four plates. Divide bananas between the four plates, scattering slices over the French toast. Sprinkle chopped pecans over the bananas. Serve with warmed pancake syrup, letting each diner pour on their own.

Spices of Life: Simple and Delicious Recipes for Great Health

Healthy cooking at its finest, and tastiest.