2. A Book Review: The Mistress of Spices

Have you ever had a cassia roll? Technically, you probably have. Most of what we call cinnamon is actually cassia. In the United States we use approximately six times more of the milder tasting cassia than “true” cinnamon. Both are basically the same plant, cassia is native to Vietnam and the eastern Himalayas while cinnamon is native to Ceylon (AKA: Sri Lanka) and southern India. The Food, Drug and Cosmetic Act of 1938 permits spice traders to label cassia as cinnamon.

Like so many of the great spices, they are harvested from evergreen trees but in the case of cinnamon and cassia, the bark is harvested rather than the fruit. A special knife is used to cut strips of bark. The outer, cork-like, layer of the bark is scraped off and the strips are left to dry. As they dry, they curl into the “quills” we know as cinnamon sticks. The finest cinnamon comes from Ceylon, the finest cassia, from Saigon. Most of our cassia is imported from Indonesia. When ground, true cinnamon takes on a tan color and cassia becomes the familiar reddish brown powder.

One of the oldest spices known to man, cinnamon is also one of the most important. It can be found in nearly every cuisine from Chinese Five Spice Powder and Indian curries to Mexican hot chocolate and our own beloved cinnamon rolls. It became essential in the embalming process of ancient Egyptians and is mentioned frequently in the Bible. Cinnamon and cassia have been used medicinally throughout history, documented back to 1500 BC. Christopher Columbus was haunted by the fact that he never found access to cinnamon and the other valuable Asian spices.

(or look for a product called "Fruit Bits")

Simmer quinoa, water and apple juice in a covered saucepan for 10 minutes. Add fruit, coconut and sugar and simmer 10 minutes more. Stir in butter and cinnamon. Serve hot with milk or cream, if desired. 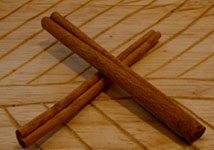