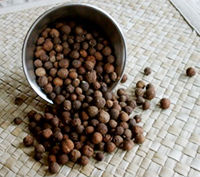 It is not a combination of spices, but a spice all its own. Allspice is often overlooked because the name is confusing. Named by Dr. Diego Chanca, a participant of Columbus’ second voyage to the New World, because its flavor resembled cinnamon, cloves and nutmeg. Allspice did not become recognized as a culinary spice until many years later. Most of the world calls it Jamaican Pepper or Pimento because it is the fruit of the pimento tree found primarily in Jamaica. Attempts to cultivate this evergreen myrtle tree in other parts of the world have failed.

Pimento trees can grow up to 100 feet and live longer than 100 years. Allspice is harvested only from female trees and the berry is picked totally mature but unripened, or green. The berry is then dried, resulting in a spice about the size of a pea with a dark, reddish-brown color and a strong clove-like flavor and aroma. Because Jamaicans grow the majority of allspice on the market and produce the highest quality, pricing is controlled through a monopoly by that government. Ironically, allspice is said to symbolize compassion.

Versatile allspice is sold in both whole and ground form. The whole dried berry is an essential ingredient in pickling spices and is often used in preparing meats and fish. When ground, allspice adds a warm flavor to baked goods, sauces and vegetables. The flavor intensifies on standing when used for cooking.

Combine flour, oats and brown sugar in a medium bowl. Using a pastry blender, cut in butter until mixture resembles fine crumbs. Stir in nuts. Set aside 3/4 cup of this mixture for the topping. Press remaining mixture into the bottom of the prepared pan. Bake 10 minutes. Cool slightly.

Cook up some sunshine anytime of the year with a book that's as fun to read as it is to eat from. Alligator anyone?