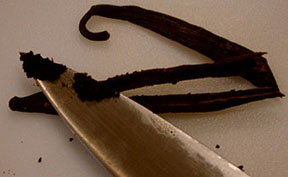 "Vanilla is the outstanding contribution of the Western Hemisphere to the spices of the world," says Frederic Rosengarten, Jr. in The Book of Spices. The world seems to agree since we have consumed enough of it to make vanilla the most popular flavoring of sweets.

Rich in taste and intensely aromatic, vanilla has a special flavor on its own but also serves to enhance other foods. It is often combined with chocolate to heighten that taste and will do the same for milk and sugar.

Vanilla planifolia is a beautiful, unique plant. This hefty member of the orchid family is the only one to produce an edible fruit, our beloved vanilla bean. Left alone in the wild, the creeping vine may extend to lengths of 80-plus feet. It is native to Mexico, Central America, the West Indies and South America. Each blossom lasts only one day and pollination is limited to melipone bees and a few particular hummingbirds found only in these regions.

Because of this, Mexico maintained a complete monopoly of the vanilla bean trade until 1836. That is when Belgian botanist Charles Morren determined that the flowers could be pollinated manually. By 1841 Edmond Albius, on the island of Reunion, perfected the pointed bamboo stick method of hand pollination still in use today.

You may have noticed that vanilla beans are a costly ingredient. Retail price per bean is about $2. Production of vanilla is a long process. The vines are grown on living supports, such as trees or shrubs, which must also be maintained. Vanilla vines must be pruned frequently to prevent them from growing out of reach for the human pollinators.

Vanilla beans grow from the fertilized flower in the form of long, green pods. They are harvested by hand just before they ripen to a yellow color. Now the work really begins. At this point the green pods have no flavor. They must be "cured."

Curing, or drying, will take nearly six months. The green pods are given a brief hot water bath before the sweating and drying process begins. Mexican growers skip this water step. Sweating lasts about 15 days. Each day the beans are laid out in the sun to absorb heat. They are then wrapped in blankets to sweat until the next day. Vanillin, a white crystalline substance, occurs during this fermentation time. The flavor of the vanilla as we know it has finally set in.

After the sweating process is complete, the beans are left to dry in the sun, or heated rooms, for many more weeks. What began as five pounds of green pods will now have been reduced to one pound of dried beans ready for the market.

Vanilla beans are sorted and graded before being tied into bundles and packed in tin. The beans that command the highest prices will be about eight inches long, pliable, aromatic and plump.

Farmers and plantation owners guard their pods closely throughout the long growing and curing process because they are so valuable. Some growers will tattoo their pods with a series of pinpricks before harvest to prevent theft while other use guard dogs or human sentries to keep watch.

Mexico is still a major producer of vanilla although Madagascar's Bourbon Islands are now considered the source for the best quality beans.

Most cooks are far more familiar with vanilla extract than the real bean for flavoring. In his book, Frederic Rosengarten, Jr. likens vanilla extract production to percolated coffee. Whole beans are chopped, enclosed in stainless steel baskets and emerged in a hot water-alcohol solvent. Standard alcohol content is 35%. After "percolating," the liquid is filtered and aged before bottling.

Vanillin, that crystalline compound mentioned before, was isolated in 1858. This led to synthetic productions created from unsavory items such as pine tree sap, wood pulp or waste paper pulp, and coal tar, just to name a few. While the flavor may somewhat resemble the pure vanilla extract on the surface, it lacks the more subtle nuances and may be harshly bitter.

Vanilla beans and vanilla extract can often be substituted for one another but you will get a more true and interesting flavor from the bean. To use one, carefully cut it in half lengthwise. Run the blade of a sharp knife down the inside, scraping out the fleshy pulp. Add this and the scraped bean to the liquid in your recipe. Ideally, you would allow this to steep for about 15 to 20 minutes. Remove the bean before serving.

To get a bit more mileage from a bean after cooking with it, rinse and dry then sink the halves into your sugar bowl. After a couple of weeks you will have a pleasant vanilla sugar for baking or sweetening coffee and tea. Or you might try chopping up the used bean and tossing it in with coffee before brewing a pot.

When buying vanilla extracts be sure to avoid the words "imitation vanilla." True vanilla extracts may cost a good deal more but at least you know they are actually made from vanilla beans.

Remember, too, that vanilla is a flavor enhancer. Think of adding it to fresh fruits as well as sweets. Rumor has it vanilla will take a lobster to new heights.

This recipe is my rendition of "Sorbet Caribe" found in the "Sundays at Moosewood Restaurant" cookbook. It's a wonderful dessert for a Mexican dinner party because everything can be set up ahead and simply whirled in the food processor just before serving.

In the bowl of a food processor fitted with the steel blade, combine the frozen bananas and pineapple juice with the 3 Tablespoons coconut and the vanilla. Process until smooth and thick. Spoon into chilled dessert dishes. Garnish as desired and serve immediately.

The Flavor Bible: The Essential Guide to Culinary Creativity, Based on the Wisdom of America's Most Imaginative Chefs

At last, the answer to the age old question of what goes with what. Thousands of ingredients are listed and cross-referenced making this book part reference, part cookbook.

Nathaniel's Nutmeg: Or the True and Incredible Adventures of the Spice Trader Who Changed the Course of History

The spice race is on and a major battlefield is Run Island. Don't miss the action in this fun account of history.

The New Food Lover's Tiptionary: More Than 6,000 Food and Drink Tips, Secrets, Shortcuts, and Other Things Cookbooks Never Tell You

Solve your problems, settle your curiosity or just entertain yourself with this collection of over 6000 kitchen wisdom nuggets.

Aromatherapy: A Complete Guide to the Healing Art

This book gets rave reviews as an introduction to using essential oils for health, beauty and relaxation. Includes more than 90 formulas. There's a Kindle edition, too.