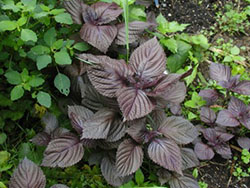 The first time I saw shiso used as an ingredient was at a sushi bar. The chef garnished a plate with one of the frilly leaves and a light sparked inside my cook's mind. Is that how we ended up with that wacky plastic grass on our sushi trays, I wondered? Fast forward one year to the broadcast of a PBS cooking show with Ming Tsai about shiso. Sure enough, he confirmed my suspicions.

Native to eastern Asia, shiso is grown as a crop in South Korea, China, Japan, India and Thailand. The plant was introduced to the United States in the 1800's when Japanese and Korean workers brought the seeds of their beloved herbs with them. Shiso was later found in wooded areas near camps where Japanese-Americans were held during World War II and is known as the weed beefsteak plant in much of the Midwest.

The seeds of shiso are pressed for an oil that has medicinal, culinary and commercial applications. At one time it was even used as fuel oil. The seeds possess a quality that is on par with other drying oils such as tung or linseed valued in painting products and for waterproofing cloth.

The foliage of shiso can be converted into a food coloring. Essential oils distilled from the leaves are sometimes used in flavoring foods and enhancing fragrances.

Shiso may be common in Asia but is just lately becoming popular as a culinary herb in North America. The botanical name is Perilla frutescens so you may also hear it referred to as perilla. It is a pretty plant, an annual, with spiked leaves that are ruffled or smooth and comes in shades of purple (often called red) and a brilliant green. Shiso grows well from seed sown after the last frost and will tolerate light shade or full sun. The word frutescens describes a shrub. You will want to pinch it back a bit as it grows to keep it compact and bushy. Near the end of the season the plant will send up attractive stalks of wee lavender flowers that give way to sweet-tasting seeds.

Like so many of our favorite herbs shiso is a member of the Lamiacea, or mint, family. You will have to try it for yourself to decide what it tastes like as everyone seems to come up with a different description. Some say it tastes like curry while others describe the flavor as a combination of cumin, parsley and cilantro with just a hint of cinnamon. My opinion is that it is similar to cinnamon basil.

Shiso leaves can be eaten raw or cooked or even pickled.  Toss the tender leaves into salads or use them as you would mint or basil in savory dishes like soups and rice or to flavor fish. Older leaves might be sliced into strips and added to stir-frys or other vegetable preparations. Shiso foliage is sometimes used to flavor vinegar. The red variety gives the vinegar an attractive pinkish tinge. Red leaves are a common ingredient in Japan's pickled plums.

Shiso seeds, toasted and salted, are a popular snack in Japan. Crushed, consider the slightly sweet seeds as a flavoring for cooking oils and mustard. Don't forget the flowers. The young sprays are charming as a garnish and in some cultures the older blooming clusters are fried.

Although I have grown this gorgeous plant in my herb garden, I have yet to develop any spectacular recipes that highlight it. For this I refer you to Ming Tsai. He has a variety of creative recipes with shiso at his television show's website. Go to Simply Ming shiso recipes.

A luscious book from the Herbfarm kitchen-nursery filled with unusual ideas for using fresh herbs. See aPinchOf.com's review of this book.

Not a cookbook but an illustrated guide to ninety fresh and dried chile peppers from a man who knows how to use them.

Growing and Using Stevia: The Sweet Leaf from Garden to Table with 35 Recipes

The Sweet Herb is hot! This tiny tome shows you how to grow the pretty little plant called stevia and then what to do with it once you have a harvest.