1. The Pleasure of Fresh Herbs

3. Guidelines for Seasoning with Herbs and Spices

5. Look What I Made: An Herbal Drying Rack 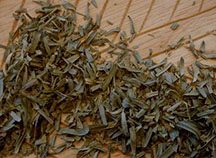 “I believe that if I ever had to practice cannibalism, I might manage if there were enough tarragon around.” James Beard, culinary guru.

Mr. Beard had an affinity for all things French and tarragon is certainly European. The name is a corruption of the French word estragon, meaning little dragon. Perhaps called this because of the coiled root system or tarragon’s reputation for healing poisonous snake bites. French chefs frequently use tarragon to compliment fish or chicken and consider it most important to béarnaise sauce and fines herbes (along with parsley, chervil, chives, savory, sage or basil).

We import much of our tarragon from France, but it is also grown successfully in California. One of the more expensive herbs, “true” (or French) tarragon must be propagated by division and is dried in the shade to preserve the leaf color and essential oils. Another species is cultivated in Russia but is considered less desirable in flavor and appearance to true tarragon. A member of the Asteraceae family, tarragon only became well known in the sixteenth century. It was introduced to the United States in 1806. Thomas Jefferson was an early champion for the new herb.

Artemesia dracunculus, as tarragon is known botanically, is a reliable herb garden plant even in the coldest climates. It will die back with the first frost, but the new, tender shoots emerging from the soil are a sure sign of spring.

This period of dormancy is an unusual attribute in the herb world. It can present a challenge to gardeners in mild climates that do not experience a freeze. Although tarragon is a perennial, it does need a period of down time in order for the next year's growth to develop.

If you want to grow tarragon, look for it as an established plant since it is nearly impossible to grow from seeds. Seeds that are labeled as tarragon are most likely the Russian variety.

Tarragon thrives in full sun without much water. The biggest danger is root rot from overwatering so make sure it has good drainage. Plants will grow two or three feet high and should be divided every couple of years. Harvest by taking cuttings from the stems at even intervals with an eye to maintaining a nice shape.

Tarragon is often referred to as the lord of culinary herbs due to its dominance. The flavor is unique, somewhat like licorice and a bit minty, yet extremely intense. This herb is best used sparingly and added near the end of cooking to make the best use of its flavor. The bright green leaves of this shrub-like plant should be stripped from the woody stem before being used for cooking. Leafy branches do make an appealing garnish on the serving platter.

This dressing is especially delectable on a simple salad of assorted fresh greens.

3 turns of peppermill, or to taste

Combine all ingredients in a small jar with a tight fitting lid. Shake well.

A handy and highly-recommended  reference for growing herbs, vegetables and edible flowers on your deck or patio. See aPinchOf.com's  review of this book.

Your Backyard Herb Garden: A Gardener's Guide to Growing Over 50 Herbs Plus How to Use Them in Cooking, Crafts, Companion Planting and More

Learn herb gardening from the ground up, literally, with the help of a knowledgeable teacher and gardener.