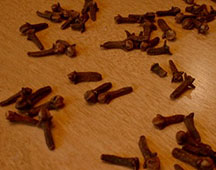 The clove is the only spice that is smoked more than eaten.  You are probably familiar with the sweet odor of kretek, the clove cigarettes from Indonesia.  More than half the world's clove production is ground with tobacco to make kretek.

Resembling small nails, the name clove is in fact derived from the French word clov, meaning nail.  Each "nail" is an unopened flower bud of the clove tree, a tropical evergreen member of the Myrtle family.  A clove tree, known botanically as Eugenia aromatica, may live 100 years.  They begin producing fruit at seven years and come into full maturity at around 25 years.  The average crop yield is eight pounds although each year is different.  The trees are indigenous to the Moluccas, also known as the Spice Islands.  For a period of time around the 1700's, it looked as if the clove trees would never grow anywhere but on the island of Amboina.

At least this was the plan instituted by the Dutch government to control their monopoly of the valuable spice.  They proceeded to destroy every clove tree that grew on any other island in the Moluccas.  In the process, they broke the hearts of many a parent who had planted a tree to honor a child's birth.  The Moluccan natives believed that if anything happened to this tree, that child's future was doomed. By 1818, the French had established smuggled clove tree seedlings on the islands of Zanzibar and Pemba, breaking the longstanding monopoly held by the Dutch.

Cloves are now produced in Brazil and Indonesia although the finest are said to come from Zanzibar and Madagascar.

The first mentions of this hot, pungent flavor have been found referred to as the "chicken-tongue spice" in literature of third century, B.C., China.  The Chinese used cloves medicinally to relieve tooth pain, a common home remedy still today.

Cloves have been valued throughout history as a food preservative. Essential oil of clove contains phenol, a strong antiseptic used in mouthwashes, medicines and antacids. Another substance found in clove oil, eugenol, was once a popular ingredient for imitation vanilla or vanillin.

Intense in aroma and flavor, this spice is hot and slightly sweet.  Use with caution as the flavor develops sharply within a dish upon standing.  The intensity is tempered somewhat with heat.

While cloves may not be an ingredient that we reach for often, they are associated as necessary to certain dishes in different cultures.  A single clove is pushed into an onion when the French are preparing chicken stock.  Americans will recognize whole cloves garnishing a baked ham. Ground cloves are often combined with apples in England.  Cloves are commonly chewed with betel nuts throughout India.  One of the spices in the famous Chinese five-spice powder is cloves.

You might add ground cloves to baked goods or a pinch with beef and pork dishes. Use them whole in beverages and pickles.  Whole cloves also make an interesting garnish and come in especially handy for decorating gingerbread.

Whipped cream or vanilla ice cream, for serving, if desired

Preheat the oven to 425 degrees.

Combine the sugar with the cinnamon, nutmeg, cloves and salt.  Add the eggs and beat at medium speed with an electric mixer for 2-3 minutes or until fluffy.  With the mixer at low speed, blend in the pumpkin and then the cream.

Cool on a wire rack.  Serve slightly warm, if desired with whipped cream or ice cream.

Spice: Flavors of the Eastern Mediterranean

Give the Mediterranean diet a try with the help of this well-organized and informative 2007 Beard Award Nominee.

Dangerous Tastes: The Story of Spices

This is no cookbook but a serious look at spice history, cultivation and use.

The Mistress of Spices: A Novel

An exotic novel that's so much fun! The unpredictable, likable mistress will keep you turning pages until the end when you'll wish for more. See aPinchOf.com's review of this book.